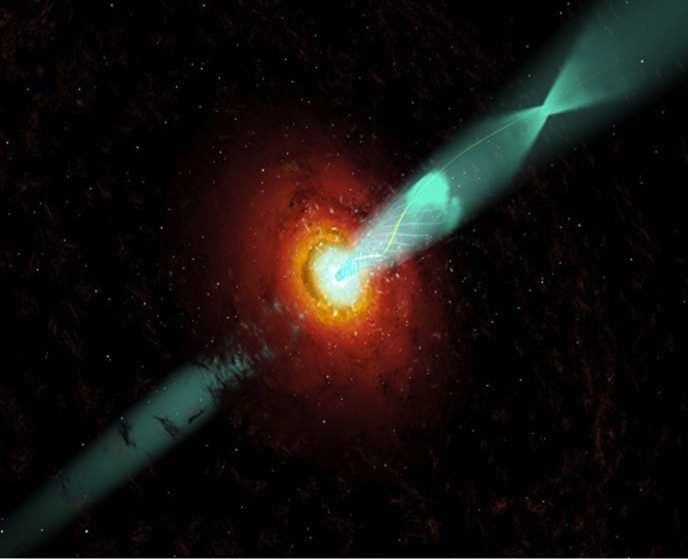 What came first, the black hole at the center of a spiral galaxy (drawing material to itself), or the galaxy first then the black hole?

Presently, the Universe consists of somewhere between a few hundred billion and perhaps upwards of a trillion galaxies, which range from a few hundredths of a percent the Milky Way’s mass to thousands of times larger than our own. Clustered in great web-like, cosmic structure, with great superclusters at the intersections of filaments and huge voids tens of millions of light-years across in between, the observable Universe stretches some 46 billion light-years in all directions from our location.

But it wasn’t always like this. In fact, it wasn’t even close! When the Universe began, it was incredibly uniform. It’s only over the billion-year timescales that our Universe has existed for that things have come to resemble what we see now.

It’s important to consider this — the largest scales in the Universe — when we start looking at this week’s question about black holes, even though these two topics may not seem to be related on the surface.

For decades, this was an ideological argument primarily between Americans, who favored a bottom-up approach, and Soviets, who favored a top-down approach. Here’s the difference:

For a long time, we didn’t have the observational evidence to tell which of these approaches were the right one.

This all began to change as we discovered and began to measure the leftover glow from the Big Bang, which told us lots of information about both the very early Universe and the composition of what’s in the Universe today. You’re probably familiar with the knowledge that, energy-wise, the Universe is made up of (mostly) dark energy and dark matter, with only a few percent being in the form of normal matter and just around 0.01% in the form of radiation, or photon energy.

We know this from a combination of multiple lines of evidence, most prominently from the cosmic microwave background, the observations of large-scale structure / cluster data, and measuring the Universe at large distances, such as from Type Ia supernovae.

This tells us what the various energy components of the Universe are, something that’s incredibly important if we want to understand how the Universe has evolved. But we can also learn — from some of these same things such as Large-Scale Structure, labeled BAO (for baryon acoustic oscillations, which are some of the best measurements of this) and the cosmic microwave background — about the magnitude and scale of the initial fluctuations in the Universe!

Do they occur on large scales, small scales, or both, and in what magnitude? How much of the fluctuations that we see come because of gravitational and electromagnetic interactions that occurred since the Big Bang, and how were these fluctuations distributed initially? The cosmic microwave background tells us a tremendous amount about this.

In particular, what we learn is that the initial pattern of fluctuations is scale invariant, meaning that there are approximately the same magnitudefluctuations on all scales, including the largest ones and the smallest ones. The oscillatory patterns that we see towards the right are because of the interplay of dark matter and normal matter with the radiation in the Universe under the influence of gravity, and is well understood.

But it’s the flat shape of the curve on the left-hand side — the largest scales — that shows us that there’s no tilt to this curve, and therefore, combined with the data from the right side, tells us that the Universe was born with approximately equal-magnitude fluctuations on both small and large scales, and every scale in between. This is actually something that’s been known fairly robustly for around 15 years, now! The latest data from WMAP and, most recently, Planck, has only confirmed this picture.

So you might think, given all of this, that we still don’t know. But there’s one more piece of information that we have about how structure forms in the Universe that does, we think, provide an answer. You see, even though the seeds of structure are there on all scales, and both contribute to small-scale and large-scale clustering today, the top-down part of this doesn’t play a major role early on thanks to the fact that the speed of gravity in this Universe is finite!

The overdense regions on the smallest scales can begin attracting more nearby matter immediately, as the speed of gravity propagates at the speed of light. On the other hand, the largest scales need to wait for time to pass; the ones that are tens or hundreds of millions of light-years across need to wait tens or hundreds of millions of years to begin to feel the gravitational force of attraction!

In other words, both the top-down and the bottom-up scenarios play a role, but the bottom-up, by virtue of starting smaller, gets a head start by millions of years! And to the best of our calculations, the very first stars in the Universe begin forming less than 100 million years after the Big Bang.

These Population III stars, the first ones to form in the Universe out of pristine hydrogen and helium, will have many of the most massive among them form the first black holes in the Universe. This is something that does not change much with time; when we get a large cluster of new stars that form, the most massive ones — the brightest, bluest and hottest of them all — will die catastrophically and have their cores collapse down into black holes. In the most extreme of cases, these stars can be many hundreds of times the mass of our Sun, giving rise to quite large black holes in under a few million years from the time of their creation!

So to the best of our knowledge, that’s what we get: a Universe where stars and black holes form early on, then galaxies both form around them and form by these young, small regions merging together. Over time, they grew to the enormous supermassive black holes and the enormous galaxies we see today. But it takes initial, comparably-sized fluctuations on both the small and large scales to reproduce what we see in our Universe.

It’s knowing all this that informs how all the structure in the Universe formed, evolved and continues to grow over time, even all the way up to the present day.

So the best answer we have is that the seeds of supermassive black holes and the seeds of galaxies were what formed first, and they did so at approximately the same time. But these black holes began as quite large structures, growing to at least many thousands of solar masses before the environments in which they were housed could ever be considered galaxies, and so it appears that black holes came first, but they form in regions that will merge-and-grow into large, rich galaxies in very short order.

So thank you, Donna, for a fantastic question, and for providing us with an opportunity to take an in-depth look at how galaxies and black holes grow — and grow up — together. If you’ve got a question or suggestion for next week’s Ask Ethan, send it in. You never know, the next column could be the answer to the question you’ve just been waiting to ask!