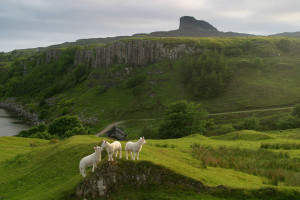 Lambs playing on an evening at Kildonan on the Hebridean island of Eigg with the Sgurr of Eigg, the island’s highest point, visible in the background. The island of Eigg was one of a chain of islands which lie of Scotland’s west coast and was accessible by a state-run lifeline service from the mainland. The residents on Eigg organised a buy-out of the island in the late 1990s and took it into community ownership.