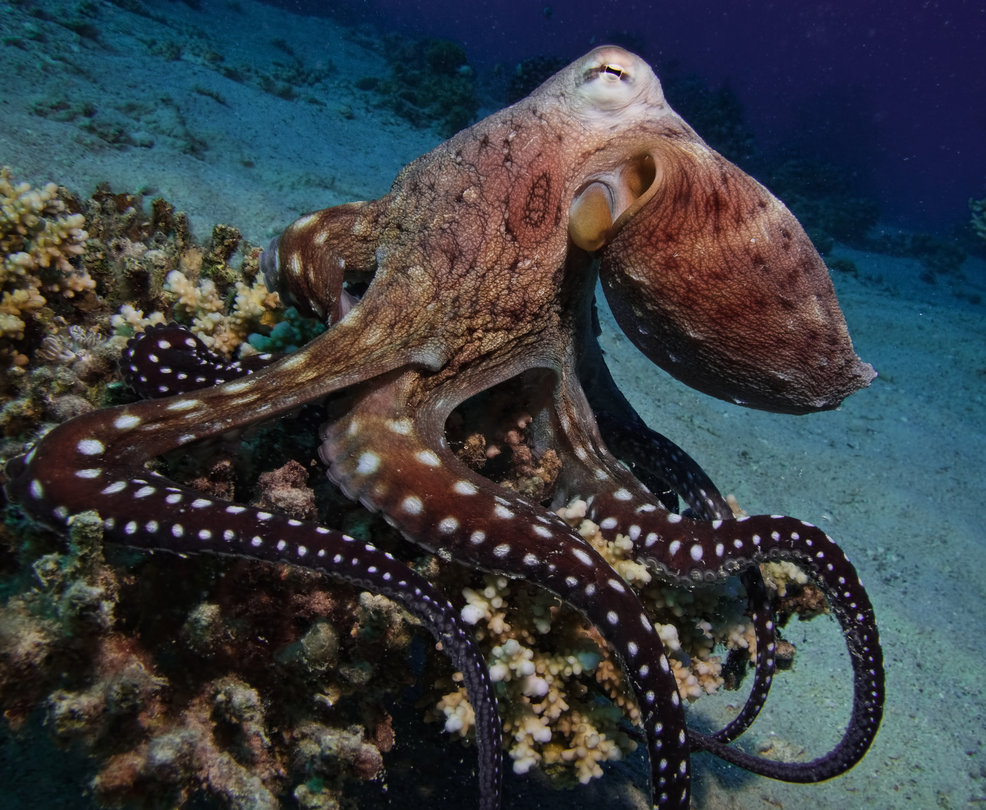 Enterprising scientists Christine Huffard and Mike Bartick watched wild octopuses in action. They found that, for males, mating can be a dangerous game. Especially when your lady has long limbs. Some of the more dicey encounters are detailed in a new paper, published online July 11 in Molluscan Research.

Hold on a second, you say. Strangling octopuses? Octopuses don’t even have necks—or inhale air. So how, exactly, does that work? The strangulation seems to happen when “an octopus wraps at least one arm around the base of the mantle of the competitor” (or mate), Huffard wrote in 2010. This constriction then keeps the octopus from taking in fresh water to run past its gills—starving the animal of its oxygen source.

Octopuses are not known to get cuddly with one another on a day-to-day basis. In fact, “octopuses touch each other with their arms primarily in the context of mating and aggression,” the researchers write. And in this case it seems to have been both.

Huffard came across a pair of mating day octopuses (Octopus cyanea) near Fiabacet Island in Indonesia. The female, as is often the case in this species, was larger—with a body about seven-and-a-half inches long; the male was closer to six inches long. They were positioned on a reef, outside the female’s den, the male’s mating arm(hectocotylus) inserted into the female’s mantle from a (presumably) safe distance.

After about 15 minutes of mating, the female inched closer to the male. And, as if lunging for a quick embrace, the female encircled the male’s mantle with her two front arms, “dragging him nearer,” the researchers describe. The female’s two arms wrapped around the male’s funnel and mantle opening. The male turned white (a common escape attempt response) and seemed to fight to slink away. But the female continued her constriction for two full minutes before wrapping an additional arm around the male. Two minutes after that, the male stopped moving.

“The female enveloped his body with her web and carried him to what appeared to be her den,” Huffard and Bartick write. Apparently the male was both date and dinner.

In a mess of 16 arms not all moves are obvious. But, like other acts of aggression, “such as grappling, arm-pulling and pushing,” the researchers note, the asphyxiation move is quite easy to spot—and is “easily distinguishable from non-aggressive arm uses employed during mating,” which include the male inserting his hectocotylus into the female’s mantle or the male’s grabbing the female’s mantle to draw her closer.

Males of this species tend to have fairly long hectocotylus arms. But, apparently, not always long enough. “A smaller male of average hectocotylus length mating by the ‘distance’ position can still be asphyxiated and killed by a larger female,” the researchers note. “When making a slight lunge forward, this large female was well within arm reach to capture and constrict a male mating”—even when he is doing so from a reasonable distance. “This observation shows that the ‘distance’ mating position can entail significant risk for a male”—especially a slightly smaller one. And it’s possible that “females might not be able to constrict males that mate with a relatively long hectocotylus,” which would give the male a head start and greater reaction time should the female start to attack.

Interestingly, in this species and others that are prone to sexual cannibalism by females, the males have especially long hectocotylus arms.

Although this male did not escape a grim fate, his genes may still live on. “Because this case of possible sexual cannibalism was post-copulatory this male might have ultimately fertilized some of the cannibalizing female’s eggs,” Huffard and Bartick write. Had he lived, however, he could have tried his luck with other females. Perhaps with a slightly less leggy lady.

Massive Bronze-Age City Discovered off Peloponnese
Cannabis Capsules Cure One Man’s Terminal Ca...
People Prefer Electric Shocks to Being Alone With ...
Why Tattooing Is Universal
Why There Might Be More Universes Than Our Own
A System That Reverses Paralysis: How It Works
The Top Ten Parasites That Could Be Lurking In You...
Why Gratitude Is So Good For You