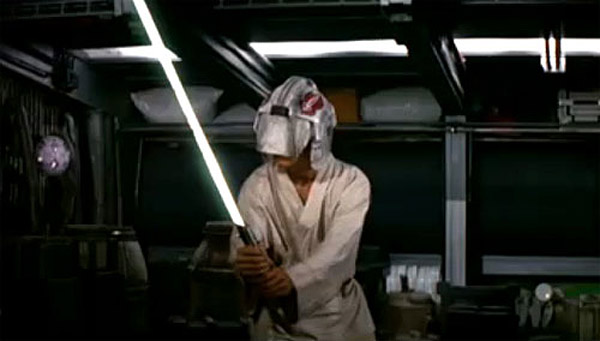 “General Kenobi. Years ago you served my father in the Clone Wars. Now he begs you to help him in his struggle against the Empire. I regret that I am unable to convey my father’s request to you in person, but my ship has fallen under attack, and I’m afraid my mission to bring you to Alderaan has failed. I have placed information vital to the survival of the Rebellion into the memory systems of this R2 unit. My father will know how to retrieve it. You must see this droid safely delivered to him on Alderaan. This is our most desperate hour. Help me, Obi-Wan Kenobi. You’re my only hope.” -Princess Leia, in Star Wars: A New Hope

Of all the dreams that the imaginative galaxy far, far away where Star Wars take place has spawned in our collective imagination, none is more sought-after than the dream to have our own light saber. While neural technology and bluetooth connectivity might soon give rise to a force-like reality, I want to focus on what’s a reality today.

Or, in this case, a real light saber!

While it still isn’t possible to harness a static beam of energy, it is possible to emit intense, monochromatic laser light that can do some serious damage, and it’s also possible to confine that laser light to exist within a cavity. With these dual applications in mind, the company Wicked Lasers has created theLaserSaber, which is as close as you can get to the real thing!

You know that powerful, hand-held lasers have existed for a long time. You can obtain these incredibly large powers in one of two ways: either by going to high individual photon energies, which will give you ultraviolet, X-ray or even gamma-ray lasers, or by remaining at lower, visible light wavelengths and going to higher intensities/luminosities. The latter approach, for what it’s worth, is the one to take if you’re interested in a visually stunning, Star Wars-like light show.

Well, the company Wicked Lasers not only has some of the world’s most powerful hand-held lasers — reaching up to around 2 Watts of power, which is a lot for a laser — but they come in your four favorite star wars colors:

So, with one of those high-powered lasers in hand, Wicked Lasers came up with the ingenious idea of building an attachment for their powerful lasers that contained a clear sheath the size of a lightsaber with a diffusive optical element inside, along with a magnetic sphere that would be attracted to the top of the clear sheath when the laser is turned on.

In the “off” position, it just looks like this.

But when you turn it on… well, better to let Wicked Lasers show you for themselves! (Yes, this was clearly designed to be marketed to six year olds, which is odd for a company that wants you to take how dangerous these lasers are seriously. And with good reason; these things can easily blind you permanently, even if they merely ricochet off of multiple partially reflective surfaces!)

When we first created the sleek, sophisticated design of the S3 laser, George Lucas attempted to sue us over it. We’re betting he’s having some trouble with the LaserSaber’s design, too. With a hilt of virtually indestructible aircraft grade aluminum and a US-manufactured 32’’ long, 1/8’’ thick polycarbonate tube, the LaserSaber is strong, highly durable, and fully capable of harnessing the most powerful lasers in the known universe.

Call me crazy, but if George Lucas decides to sue you, you’ve gone and made something worth having. For those of you with between $400 and $1000 to burn like it’s no big deal, let me know how it works. And for the rest of you, have a great whatever’s-left-of-your-weekend, and I’ll see you back here soon for more wonders and joys of the Universe!

This article first appeared at Medium.com