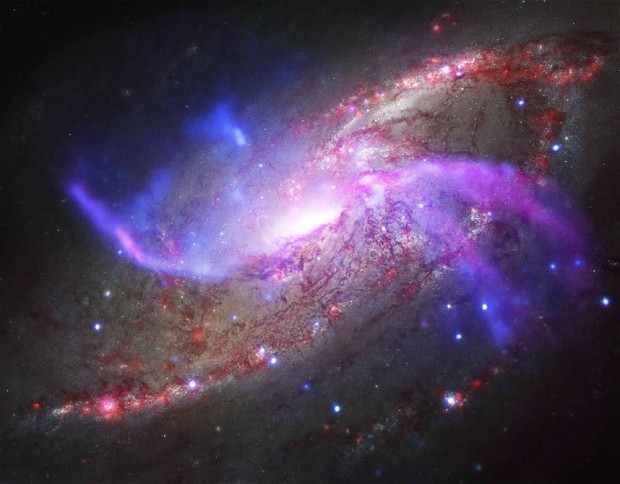 Astrophysicists mystified after noticing 80 per cent of the light in the universe appears to be missing.

The universe is a pretty dark place – but according to astrophysicists it is much too dark.

Scientists have been left scratching their heads after noticing there is a huge deficit of light.

The amount of light in the universe can be measured accurately by studying tendrils of hydrogen which become ionised, or charged, when they encounter ultraviolet light.

The more ionised hydrogen you can spot, the more light should exist.

But, according to a new study in Astrophysical Journal Letters, the hydrogen tendrils suggest there is far more ultraviolet light around than is being emitted by galaxies and quasars.

An astonishing five times too much, in fact, and it is leading astrophysicists to speculate that the photons could be coming from an “exotic new source”, or even decaying dark matter.

It means that 80 per cent of light in the universe is effectively missing.

“It’s as if you’re in a big, brightly-lit room, but you look around and see only a few 40-watt light bulbs,” noted Carnegie’s Juna Kollmeier, lead author of the study. “Where is all that light coming from? It’s missing from our census.”

Intriguingly, the mismatch only appears in the nearby, relatively well-studied cosmos.

When telescopes focus on galaxies billions of light-years away (and therefore are viewing the universe billions of years in its past), everything seems to add up.

The fact that this accounting works in the early universe but falls apart locally has scientists puzzled.

The light in question consists of highly energetic ultraviolet photons that are able to convert electrically neutral hydrogen atoms into electrically charged ions.

The two known sources for such ionizing photons are quasars – powered by hot gas falling onto supermassive black holes over a million times the mass of the Sun – and the hottest young stars.

Observations indicate that the ionizing photons from young stars are almost always absorbed by gas in their host galaxy, so they never escape to affect intergalactic hydrogen. But the number of known quasars is far lower than needed to produce the required light.

“Either our accounting of the light from galaxies and quasars is very far off, or there’s some other major source of ionizing photons that we’ve never recognized,” Kollmeier said.

“We are calling this missing light the photon underproduction crisis. But it’s the astronomers who are in crisis — somehow or other, the universe is getting along just fine.”

The anomaly emerged from comparing supercomputer simulations of intergalactic gas to the most recent analysis of observations from Hubble Space Telescope’s Cosmic Origins Spectrograph.

“The simulations fit the data beautifully in the early universe, and they fit the local data beautifully if we’re allowed to assume that this extra light is really there,” said Ben Oppenheimer a co-author of the study from the University of Colorado.

“It’s possible the simulations do not reflect reality, which by itself would be a surprise, because intergalactic hydrogen is the component of the universe that we think we understand the best.”

“The most exciting possibility is that the missing photons are coming from some exotic new source, not galaxies or quasars at all,” said Neal Katz a co-author from the University of Massachusetts at Amherst.

For example, the mysterious dark matter, which holds galaxies together but has never been seen directly, could itself decay and ultimately be responsible for this extra light.

“You know it’s a crisis when you start seriously talking about decaying dark matter,” Katz added.

“The great thing about a 400 per cent discrepancy is that you know something is really wrong,” said co-author David Weinberg of the Ohio State University.

“We still don’t know for sure what it is, but at least one thing we thought we knew about the present day universe isn’t true.”

This article first appeared at the The Telegraph.com