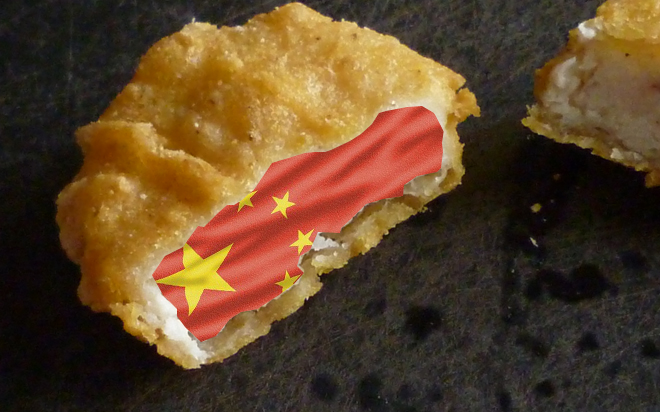 The U.S. recently lifted their ban on chicken imports from China, and under newer “country of origin” labeling requirements, won’t require the processed chicken to mention where it came from.

China’s food industry has been marred with numerous safety problems in recent years. From the H7N9 and H5N1 bird flu virus to certain types of meat being passed off as others, they haven’t exactly been the star of meat safety. Still, the U.S. recently lifted their ban on chicken imports from China, and under newer “country of origin” labeling requirements, won’t require the processed chicken to mention where it came from.

“[I am] immediately taking anything and everything with processed chicken off my shopping list. It’s been clear for a long time now that products from China are simply not safe and may even be harmful,” said one consumer to The Atlantic last year when the news broke.

The U.S. banned Chinese chicken imports in 2004, with the avian flu outbreak. China likewise stopped importing U.S. chicken that same year. When the bird flu began subsiding, China opened up their doors again to American imports, but we didn’t reciprocate, leading the Eastern country to file a complaint with the World Trade Organization (WTO). After some back and forth, failed and then-passed inspections of processing facilities, and interventions by the WTO, the U.S. was set to lift the ban last year.

The ban-lifting came at the same time as new requirements on country-of-origin labels, requiring imported meat to be marked with where it originated. Those requirements, however, didn’t extend to processed chicken. And as imports from China began again, 4 facilities in that country were approved to send processed chicken products to American consumers.

The New York Times noted at the time:

“…because the poultry will be processed, it will not require country-of-origin labeling. Nor will consumers eating chicken noodle soup from a can or chicken nuggets in a fast-food restaurant know if the chicken came from Chinese processing plants.”

The FDA reported then that 600 dogs and cats were killed by eating treats containing processed Chinese poultry, certainly not reassuring to American consumers.

“Given Chinese processors poor track record with regard to food-safety standards, the USDA should be taking every possible step to ensure that the chicken that ends up on our plates and in our McNuggets is safe – and raised right here in the United States,” said Sen. Chuck Schumer of New York.

This article first appeared at NaturalSociety.com

Two of the Exoplanets Closest to Earth Don’t Actua...
Why not even exercise will undo the harm of sittin...
Report: Climate Changing More Rapidly Than At Any ...
The True Cost of Your Beef Burger Is Much Higher T...
Why The Amazon River Flows Backward
Less Materialism May Be Good for Consumers And Env...
Eigg Is The First 100% Self Sustaining Place On Ea...
Did Ancient Bog Mummies Travel Through Supernatura...