Spider silk is an impressive material; lightweight and stretchy yet stronger than steel. But the challenge that spiders face to produce this substance is even more formidable. Silk proteins, called spidroins, must convert from a soluble form to solid fibers at ambient temperatures, with water as a solvent, and at high speed.

How do spiders achieve this astounding feat? In new research publishing in the open access journalPLOS Biology on August 5, Anna Rising and Jan Johansson show how the silk formation process is regulated. The work was done at the Swedish University of Agricultural Sciences (SLU) and Karolinska Institutet in collaboration with colleagues in Latvia, China and USA.

Spidroins are big proteins of up to 3,500 amino acids that contain mostly repetitive sequences, but the most important bits for the conversion of spidroins into silk are the ends. These terminal regions of the proteins are unique to spider silk and are very similar between different spiders. Spidroins have a helical and unordered structure when stored as soluble proteins in silk glands, but when converted to silk their structure changes completely to one that confers a high degree of mechanical stability. These changes are triggered by an acidity (pH) gradient present between one end of the spider silk gland and the other. The gland proceeds from a narrow tail to a sac to a slender duct, and it is known that silk forms at a precise site within the duct. However, further details of spider silk production have been elusive. 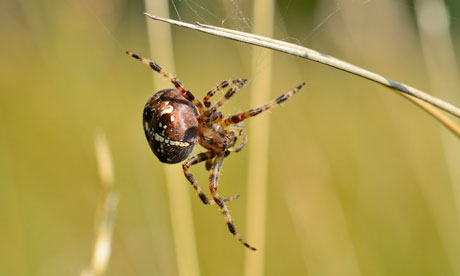 By using highly selective microelectrodes to measure the pH within the glands, the authors showed the pH falls from a neutral pH of 7.6 to an acidic pH of 5.7 between the beginning of the tail and half-way down the duct, and that the pH gradient was much steeper than previously thought. The microelectrodes also showed that the concentration of bicarbonate ions and pressure of carbon dioxide simultaneously rise along the gland. Taken together, these patterns suggested that the pH gradient might form through the action of an enzyme called carbonic anhydrase, which converts carbon dioxide and water to bicarbonate and hydrogen ions (and thereby creating an acidic environment). Using a method developed by the authors, they were able to identify active carbonic anhydrase in the narrower part of the gland and confirm that carbonic anhydrase is indeed responsible for generating the pH gradient.

The authors also found that pH had opposite effects on the stability of the two regions at each end of the spidroin proteins, which was surprising given that these regions had been suggested to have similar roles in silk formation. While one of the ends (the “N-terminal domain”) tended to pair up with other molecules at the beginning of the duct and became increasingly stable as the acidity increased along the duct, the other end (the “C-terminal domain”) destabilized as the acidity increased, and gradually unfolded until it formed the structure characteristic of silk at the acidic pH of 5.5. These findings show that both ends of the protein undergo dramatic structural changes at the pH found at the beginning of the duct, which is also the point where carbonic anhydrase activity is concentrated.

These insights led the authors to propose a new “lock and trigger” model for spider silk formation, in which gradual pairing up of the N-terminal domains locks spidroins into a network of many protein molecules, while the changes of structure in the C-terminal domains could trigger the rapid polymerization of spidroins into fibers. Interestingly, the structure of the C-terminal domain is similar to those in the “amyloid” fibrils found in the brains of individuals with diseases such as Alzheimer’s disease. This mechanism elegantly explains how spider silk can form so quickly and smoothly within the spinning duct of these amazing animals. Besides helping humans to understand how they might mimic the spiders to produce biomimetic spidroin fibers for our own purposes, knowing how spiders spin silk could give insights into natural ways of hindering the amyloid fibrils associated with diseases like dementia.

The above story is based on materials provided by PLOS. Note: Materials may be edited for content and length.