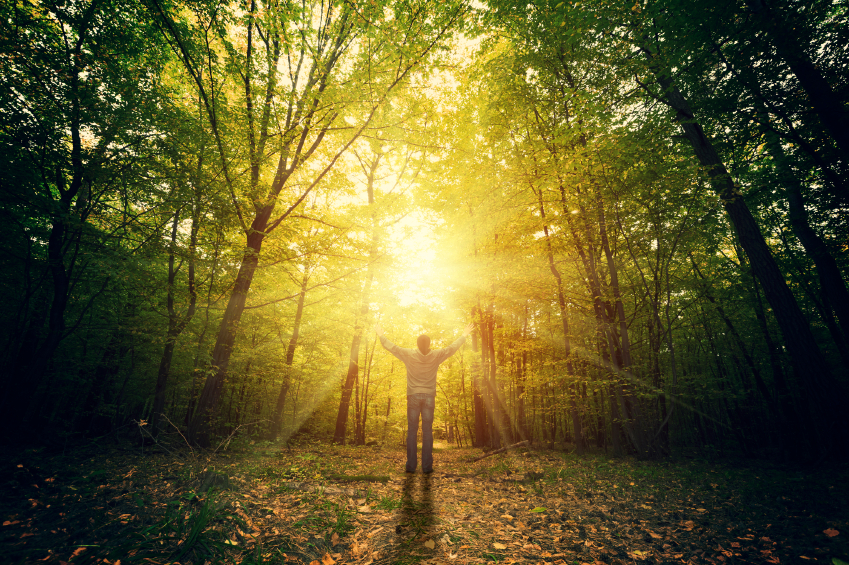 Some international physicists are convinced, that our spirit has a quantum state and that the dualism between the body and the soul is just as real to as the “wave-particle dualism” of the smallest particles.

Dr. James G. of San Francisco, a former coworker of the German Max-Planck Society in Frankfurt, reported the following incredible story. “I studied not only in the USA, but I also studied chemistry in London for a few semesters. When I came to England, the student housing was full, so I added my name to a waiting list. A short time later, I received the joyous news that a room had become available. Shortly after I had moved in, I awoke one night and in the twilight was able to see a young man with curly, black hair. I was terrified and told the alleged neighbor that he had the wrong room. He simply cried and looked at me with great sadness in his eyes.

When I turned on the light, the apparition had disappeared. Since I was one hundred percent sure it had not been a dream, I told the housemaster about the strange encounter the next morning. I gave her a detailed description of the young man. She suddenly paled. She looked through the archives and showed me a photo. I immediately recognized the young man who had visited me in my room the evening before. When I asked her who he was, she replied with a quivering voice that it was the previous renter. She then added that my room had become available because he had taken his life shortly before.”The author would never have recorded the story had “James” not been an absolutely trustworthy person.

Prof. Dr. Hans-Peter Dürr, former head of the Max Planck Institute for Physics in Munich, represents the opinion that the dualism of the smallest particles is not limited to the subatomic world, but instead is omnipresent. In other words: the dualism between the body and the soul is just as real to him as “wave-particle dualism” of the smallest particles. According to his view, a universal quantum code exists that applies for all living and dead matter. This quantum code supposedly spans the entire cosmos. Consequently, Dürr believes – again based on purely physical considerations – in an existence after death. He explains this as follows in an interview he gave:

“What we consider the here and now, this world, it is actually just the material level that is comprehensible. The beyond is an infinite reality that is much bigger. Which this world is rooted in. In this way, our lives in this plane of existence are encompassed, surrounded, by the afterworld already. When planning I imagine that I have written my existence in this world on a sort of hard drive on the tangible (the brain), that I have also transferred this data onto the spiritual quantum field, then I could say that when I die, I do not lose this information, this consciousness. The body dies but the spiritual quantum field continues. In this way, I am immortal.”

Dr. Christian Hellweg is also convinced the spirit has a quantum state. Following his studies in physics and medicine, he researched brain function at the Max Planck Institute for Biophysical Chemistry in Göttingen for many years. He was able to show that information in the central nervous system can be phase encoded. In recent years, he has dedicated himself to studying the body-soul issue and researching phantom perceptions and hallucinations. He is especially interested in tinnitus, a phantom perception in the sense of hearing. He has also specialized in the therapy thereof. He summarizes his thesis as follows:

“Our thoughts, our will, our consciousness and our feelings show properties that could be referred to as spiritual properties…No direct interaction with the known fundamental forces of natural science, such as gravitation, electromagnetic forces, etc. can be detected in the spiritual. On the other hand, however, these spiritual properties correspond exactly to the characteristics that distinguish the extremely puzzling and wondrous phenomena in the quantum world. Quantum world, in this case, refers to that realm of our world that is not yet factual; in other words, the realm of possibility, the realm of uncertainty, where we do “know what”, but do not exactly “know when or how”. Based on the context of traditional physics, it can, out of necessity, be concluded that this realm must actually exist.”

American physicist John Archibald Wheeler hits a similar nerve, “Many scientists hoped…that the world, in a certain sense, was traditional – or at least free of curiosities such as large objects being in the same place at the same time. But such hopes were crushed by a series of new experiments.” There are now university research teams examining the interaction between consciousness and material. One of the leading researchers in this field is physicist Professor Robert Jahn of Princeton University in New Jersey. He concludes that if effects and information can be exchanged in both directions between the human consciousness and the physical environment, then one must also assume a resonance or “molecular binding potential” for the consciousness as well. In summary: according to this theory, one would have to award the consciousness the known quantum properties as well. In his opinion it makes no sense, to assign terms such as information or resonance to either the physical world or the spiritual consciousness or to separate physical effects from spiritual effects.

Quantum physicist David Bohm, a student and friend of Albert Einstein, made similar claims. His summary: “The results of modern natural sciences only make sense if we assume an inner, uniform, transcendent reality that is based on all external data and facts. The very depth of human consciousness is one of them.”

Nuclear physicist and molecular biologist Jeremy Hayward of Cambridge University makes no secret of his convictions either: “Many scientists who are still part of the scientific mainstream are no longer afraid to openly state that consciousness / awareness could, in addition to space, time, matter and energy, be a fundamental element of the world – perhaps even more fundamental than space and time. It may be a mistake to ban the spirit from nature.” It is even questioned as to whether matter should be considered a fundamental element of the universe.

How Deep Does The Multiverse Go?
Less Materialism May Be Good for Consumers And Env...
What Are Boys and Girls Made of? The Origins of Se...
One Injection Stops Type 2 Diabetes in Its Tracks
Super Plastic Sponge Could Ease Transition To Clea...
Mysterious Spider With Blood-Red Fangs Found in Au...
Unexpected Stem Cell Factories Found Inside Teeth
Genetics May Be Key To A Nation’s Level of H...