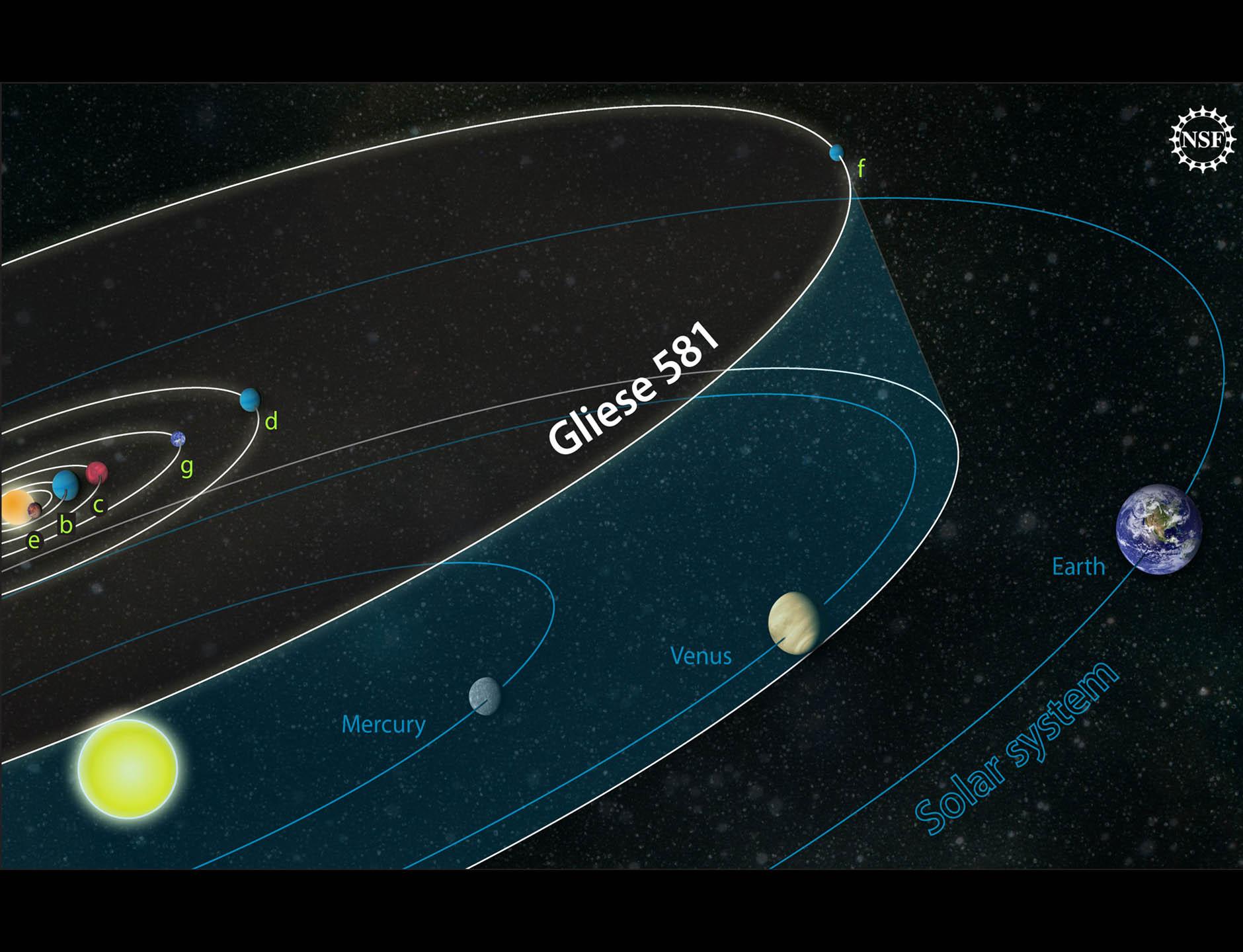 Two exoplanets, once considered excellent candidates in the search for life elsewhere in the Universe, do not exist, according to a new study in the journal Science. Both non-planets, Gliese 581d and 581g, were thought to be part of the Gliese 581 star system, located only 20 light-years away.

To those familiar with the history of the Gliese 581 system, the news comes as little surprise. Claims have been repeatedly made regarding the likelihood of habitability for some planet in the system, only to see that likelihood vanish upon closer scrutiny.

Excitement about Gliese 581 first peaked in 2007 when planet c was discovered. As one of the first exoplanets found in its star’s habitable zone (the region around a star where the temperature is ‘just right’ for liquid water to exist), planet c seemed a good candidate for life. So good that, in 2008, a high-powered digital radio signal, dubbed “A Message From Earth,” was sent in the direction of planet c. (It will arrive there in 2029, and, if anyone’s there to respond, we can expect a reply 20 years after that).

Along with two other planets, b and e, c is still considered to certainly exist. However, the initial excitement about its habitability waned when it was determined that the planet is likely victim to a runaway greenhouse effect, which would have boiled away any oceans and created conditions similar to those of Venus.

Then in 2010, a new planet was announced, termed Gliese 581g, located in the middle of the habitable zone. Besides being in the exact right place for liquid water, the planet was rocky and only a few times the size of the Earth. The scientists involved in this discovery were so excited by its possibilities that one of them declared (a bit prematurely) that he was certain there was life on the planet. Unfortunately, the planet’s existence was never certain, as some prior studies failed to find any evidence of its presence. With this week’s study, it’s clear that that g doesn’t exist at all.

Planet d was next to grab attention in 2011, as a new climate model made the planet a candidate for habitability. Planet d is at the outer limits of the habitable zone and was considered too cold to support life, but it was the best option with g in question. However, the new study seems to show that d does not exist either.

So why were scientists mistaken about two entire planets?

This week’s study measures the star’s radial velocity, meaning a star’s motion directly toward or away from the Earth.

As a planet orbits its star, it creates a gravitational pull on the star. Pulled in this way by the planet, the star moves in a circular motion. As planets are much smaller than their stars, the planet’s pull is very weak, so the star appears stationary. It does, however, wobble a little from the planet’s pull.

That wobble is detectable. When an orbiting planet is closer to Earth, it pulls the star toward Earth; when it’s on the opposite side of the star, it pulls the star away from the Earth. Scientists can measure these slight changes in the star’s radial velocity based on how it changes the light we see from the star, shifting it to redder and bluer wavelengths, respectively.

That would be a simple enough process if a star was orbited by only one planet and if it were the only thing to affect the star’s light. But exosolar systems often have more than one planet, with each planet tugging the star in different directions at the same time. Worse, there may be other phenomena that affect the star’s light, mimicking a change in radial velocity.

Scientists can only look for patterns in the radial velocity shifts. For example, if they notice a regular cycle of increase and decrease by a predictable amount, which always takes the same time to complete (say, 13 days), they may conclude that the pattern is occurring because there’s a planet orbiting the star every 13 days. (Which is the case with planet c, incidentally).

Of course, looking for regularities like this embedded within a mess of different radial velocity shifts is a little like listening to a tape recording of a crowded room and trying to extract individual voices from the din. Luckily, once scientists have identified one such pattern, they’re able to simply subtract that from the data. In other words, the researchers can mathematically remove the influence of a planet from each data point we have and see what the star’s radial velocity would look like without that planet. That makes it easier to identify more patterns—potential planets—in the remaining data and then repeat the process.

The process can be continued until there are no further patterns to observe in the radial velocity of the star, and the star is acting as it would if it were sitting still. In this way, all the planets can be identified by their periods (by the time it takes them to orbit the star).

Evidence to the contrary

Using this approach, planet d was identified to have a period of about 66 days, while planet g had a period of between 33 and 36. But the team responsible for the study noticed something suspicious about d’s period. The star, Gliese 581, rotates about every 130 days, making planet d’s period very close to half of the star’s rotational period. The scientists suspected that the pattern of changes in the star’s light might be caused by the star itself rather than by a planet.

Using data from the HARPS (High Accuracy Radial velocity Planet Searcher) spectrograph, the team looked for hints of activity in the star. This activity would resemble sunspots on our Sun. These “starspots” suppress the normal convection of material going on under the star’s surface, which slightly red shifts the star’s light, making it appear that the star’s radial velocity is altered.

Earlier studies dismissed stellar activity as an explanation for the pattern, with the 66-day period (meaning planet d) based on the star’s brightness. Starspots would cause light from the star to become dimmer, which would be detectable. Since no such dimming was observed, it was concluded that a planet—planet d—exists.

But the new study asserts that something was missed. Scientists have previously observed stellar activity in a star of the same type as Gliese 581 (specifically Barnard’s Star, another M-type red dwarf) and found that it can have an effect on the star’s apparent radial velocity without producing dim spots on the star’s surface. Such activity, rotating with the star, could produce what appears to be a regular pattern in the star’s radial velocity, which could be mistaken for a planet. And that would explain the relationship between the star’s 130-day rotation period and the 66-day period of “planet d.”

Sure enough, they found signs of stellar activity in Gliese 581, and the activity was strongly correlated with the 66-day pattern. This strongly suggests that planet d was not an actual planet but an “artifact induced by the stellar rotation,” as the authors put it.

The scientists were able to subtract the pattern of stellar activity from the overall radial velocity pattern to see what things would look like without the stellar activity. Without the activity, the signals for planets b, c, and e got much stronger, while planet d became weaker to the point of nonexistence. Planet g’s signal also disappeared altogether. This is strong evidence against the presence of these two planets.

If those two planets don’t exist, what does it mean for the system as a whole? As it turns out, not much. The team’s new model includes only three planets: b, c, and e. And their orbits aren’t changed much from previous models, except that e’s orbit is slightly more eccentric.